Fallen Rock Minor Hockey Association is proud to host the 7th Annual "Filane's Classic Mixed Softball Tournament" the weekend of July 12-14, 2019!
"The Classic" is an Open Mixed Softball tournament featuring  6 Men and 4 Women on the field at a time.
In addition to the fun-filled weekend of Baseball at the Schreiber field there will also be a
BEER GARDENS all weekend at the field and a DANCE Saturday night!
Local and Out-of-Town Teams are encouraged! Registration is $500 per Team,
with CASH as well as OTHER GREAT PRIZES up for grabs!

After an amazing weekend of weather, fun and baseball, and a busy cleanup Monday, the front office is proud to put a wrap on the 2019 Filane's Classic!

For the third straight year, the Plumbers captured the coveted "Classic Cup" defeating a familiar foe in the Mustangs 15-5 in a well played Championship Finals to win the A Division and be crowned the 2019 Filane's Classic Mixed Softball Champions! Both teams took home cash prizes as well as souvenir prizes courtesy of Hollywood Filane's Sportswear and Molson Coors.

The "C" division of 2019 has a back-to-back Champion as the Brew Crew defended their "C" title with a 22-17 win over Kyle's Drywall. Both teams captured cash and souvenir prizes from Molson Coors and Hollywood Filane's Sportswear.

Our amazing sponsor Molson Coors also had some great prizes of outdoor patio umbrellas for a couple of MVPs from the tournament. This year's Male tournament MVP, Mike Speziale, hit 3 home runs in their semi-final win over the Crossover Video Blue Jays to punch their ticket to the finals. The female MVP, Julie Bingleman McLeod, had a great weekend and an amazing Championship game hitting 4 for 4 with 2 of them being clutch huge bombs over fielders' heads for RBIs.

On behalf of the front office here at the "Classic" we want to take the opportunity to once again thank all the teams for participating. We hope everyone enjoyed the weekend of fun, baseball and great weather that we were blessed with. We also want to send a HUGE thank you to all of our volunteers throughout the weekend who gave their time to help out in various capacities. This weekend is one of many fundraising efforts for Fallen Rock Minor Hockey Association to continue to provide quality hockey opportunities for kids, and none of it would be possible without the generosity of all the volunteers and those who came out to support the weekend!

As always we hope that the second weekend of July will continue to be a weekend that folks won't want to miss in the small town of Schreiber, and thus we hope to see everyone back next year, July 10-12, 2020 for more fun and excitement!

SCHEDULE (to be determined) 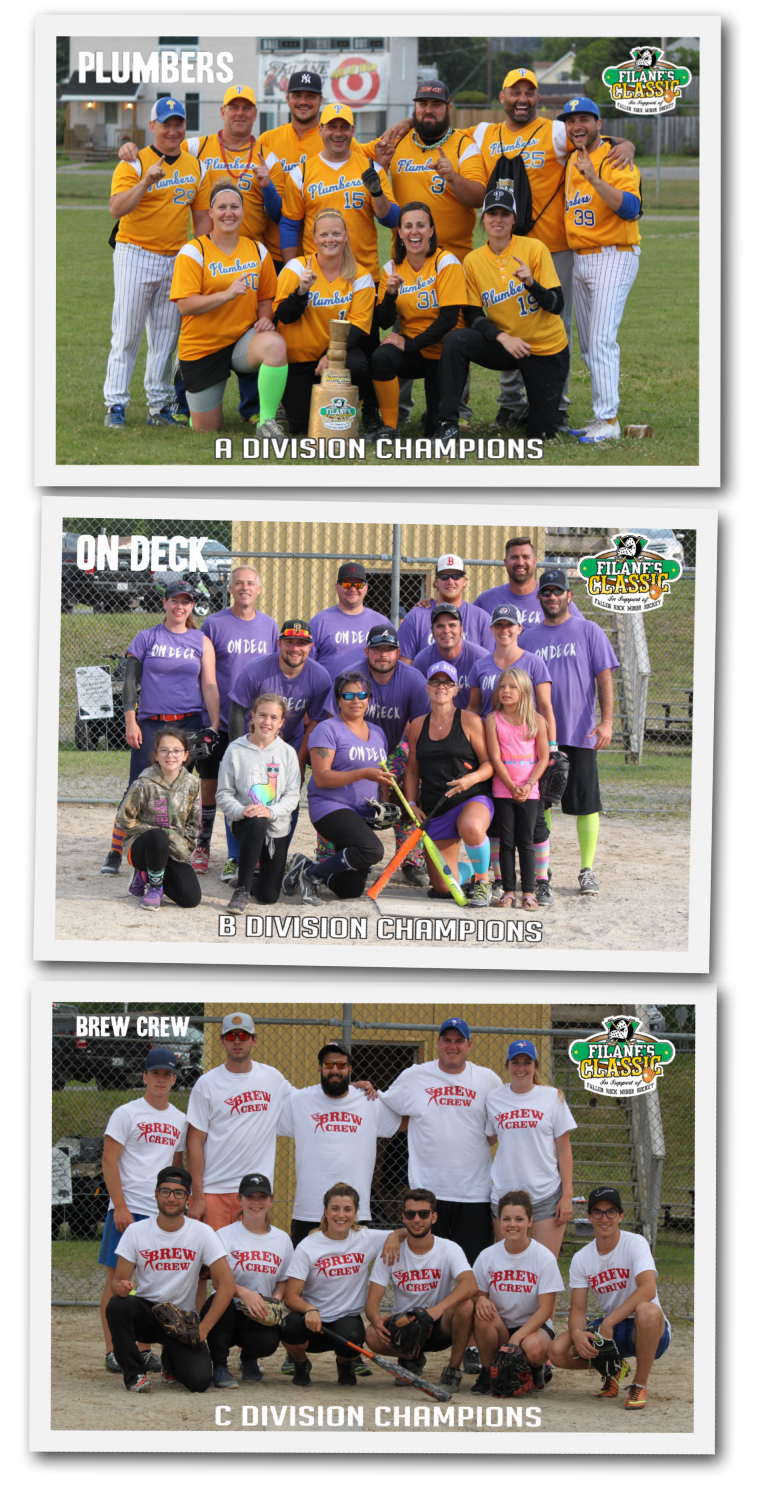 Another Filane’s Classic is in the books, and what a weekend it was!! The weekend saw 21 games of action packed softball over three days involving 13 teams. We have crowned 3 Champions and paid out 6 teams with Cash prizes as well as other prizes given away courtesy of Hollywood Filane’s Sportswear, Molson Coors, and Captain Morgan via Rob Mackinnon.

Your A division Champions are none other than the 5 time champions, the Plumbers. They defeated the Mustangs in the Championship game to take the coveted Classic Cup, souvenir championship bags from Hollywood Filane’s and the grand cash prize. The Mustangs won their cash prize, and prizes courtesy of Molson Coors.

The B division saw last year’s runner ups, On Deck, take the B championship. They take home a cash prize and souvenir championship bags from Hollywood Filane’s. Runner ups in the B saw the Slugz capture a cash prize in the loss as well as prizes courtesy of Molson Coors.

In the C division, the Brew Crew defeated the Jagerbombers in an extra inning thriller. Both teams won cash prizes as well as souvenir prizes from Molson Coors and Hollywood Filane’s.

Hardware was also given out to a male MVP and a female MVP of the tournament courtesy of Molson Coors and saw Nicole Bodnar from the Plumbers take home a sweater for the females and Curtis Haig from the Mustangs win a sweater for the males.

The last big winners of the weekend were David Figliomeni and Danielle Michano who each won patio umbrellas courtesy of Molson Coors. Dave won his as a door prize at the Dance Saturday night at the Recreation Hall and Dani won hers in the “support the beer gardens” draw! Congratulations to both winners.

On behalf of the Classic we want to congratulate all the winners, but more importantly we want to thank ALL 13 teams and the 130+ people who participated this weekend. The continued support of the Filane’s Classic has been tremendous over its 6 years, and that support of people getting out their gloves and having fun is what makes the weekend such a success!

A big thanks to all of our sponsors, especially the Villa Bianca Inn for their continued support of the Filane’s Classic and keeping everyone fueled up at the field with delicious Pizza Hut pizza throughout the weekend.

A final thank you must go out to ALL the volunteers who helped out in various ways this weekend. A weekend of this magnitude in the town of Schreiber does not happen without its volunteers so a big THANK YOU to the entire crew! 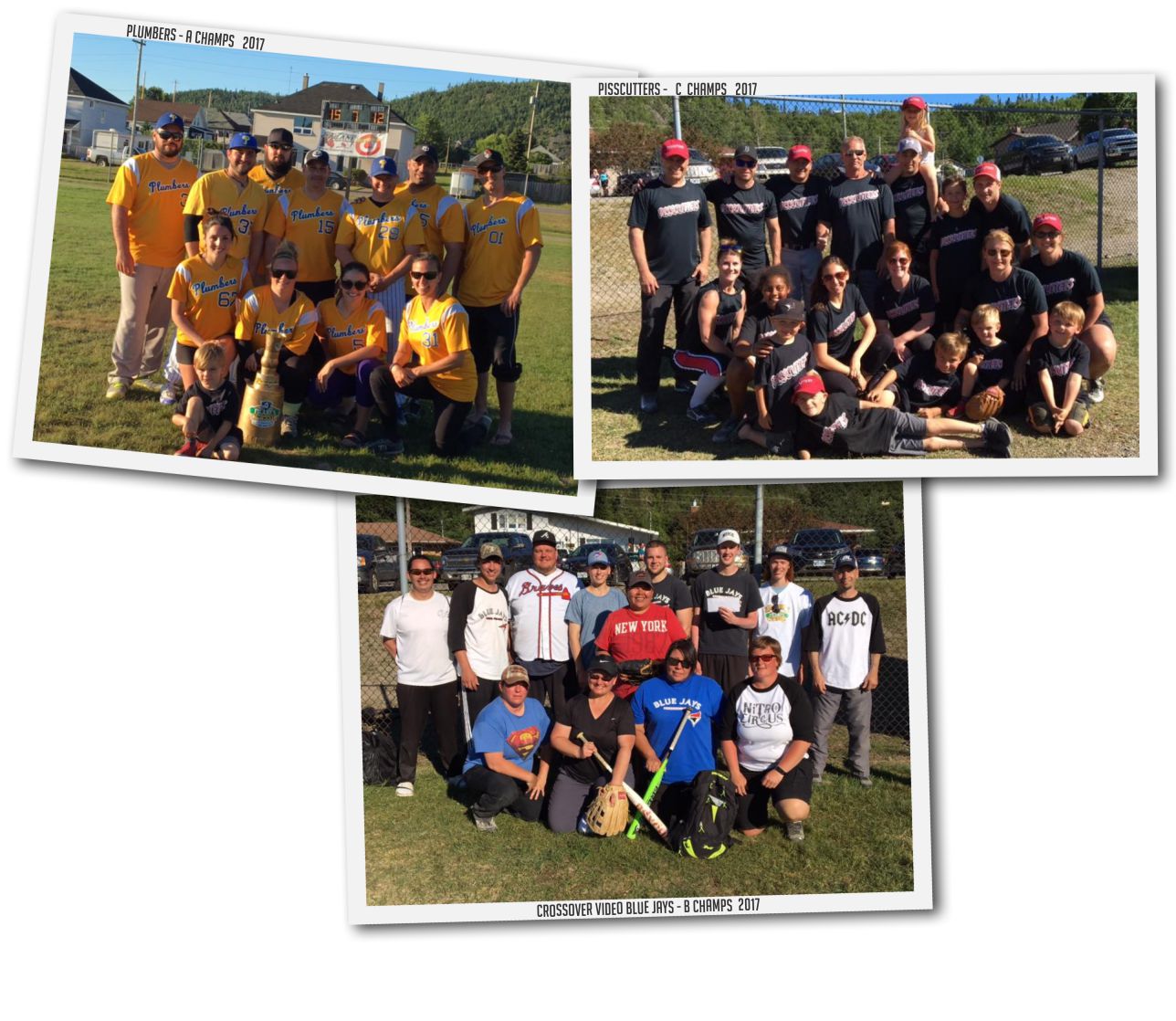 **MORE photos to be uploaded soon**

Congrats to our winners of the 2016 Heritage Days Classic

Getting the field ready after Day #2 of the Classic

Pictures from the 2015 Classic

Video - Having Fun with the returning Champs the Plumbers (2015)

Video - Slideshow of pics from 2013 Classic